Masks and masquerades are a part of Venetian life from time immemorial. When and why they started wearing masks is a matter which is subjected to speculations. But the masks were worn by the venetians from time of the great Republic.

Venetians enjoyed a high standard of living from ancient times. Trade and commerce flourished in Venice giving each of its citizens its great benefits. The masks were worn on a daily basis. May be there was a need to maintain anonymity while transactions conducted in a very small place. So the masks were worn so that anybody can go about meeting anyone without revealing their identity and more importantly their social status.

This gave an equal footing to everyone and an equal chance of success to every Venetian. But as everything else, this practice began to deteriorate and deviate from its actual purpose. People found it fit to engage in not-so-innocent activities wearing masks. As a result, society began to get corrupted. People began to be engaged in gambling and other clandestine activities. So the masks were banned in Venice in the 13th century.

Masks were an integral part of the Venetian carnival. These masks can be broadly classified in to two types - Commedia dell'arte masks and the Carnival masks.

Commedia dell'Arte was a form of popular drama performances conducted by professional artists during the 16th century. The characters and events were more of comic and rustic types. These were travelling theatres and the performers usually set up improvised stages on the streets or even at the back of their wagons. The characters in these plays wore masks and these comic masks became popular later. Most of them represent the servant class or ‘Zani’. 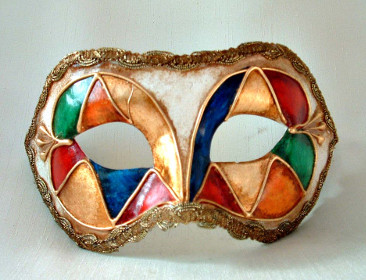 Arlecchino is a character from the Commedia dell’Arte. He is a comic servant with a large lump on his forehead.

The arleccino mask is a colorful comic face with a short nose and highly arched eyebrows. The mask has small round holes for the eyes.

This mask suits you if you decide to be an entertainer at a masquerade party.

This is another comic servant from the Commedia dell’Arte. He is supposed to be a greedy villain.

This is a half mask which expresses perpetual greed.

The mask is rather grotesque and fit to be worn during Halloween. 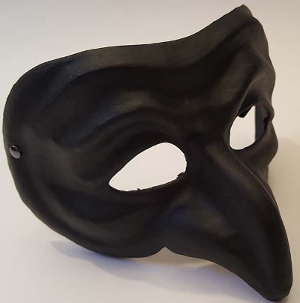 This character from the Commedia dell’Arte is a mean and nasty character. He is a hunchback in the classical Commedia Theater.

The specialty of this mask is its long curved nose and furrowed forehead. This mask often sports a funny expression together with its grotesque shape.

This is a mask suitable for Halloween and other private parties when you want to appear to project a hilariously villainous character.

This is an elderly character in the Commedia Dell’Arte. He is a rich trader who becomes a laughing stock because of his fondness for food, women and obscene jokes.

The mask is marked by its large hooked nose and slightly slanted eyes.

This mask can be worn during private parties in which you can evoke laughter by projecting a slightly atrocious character.

This is a lowly servant in the Commedia Theater.

The mask is characterized by its extremely long nose. The eyebrows of the mask are extremely prominent on a low forehead.

This is suitable for Halloween and carnivals. You will attract a lot of attention without betraying your identity.

This is a soft and meek character from the Commedia dell’Arte. The character is in tears perpetually, because he is moved to tears at the smallest possible reason.

This is a full mask with a black and white combination. The mask is white with black painted around the eyes. Usually a tear drop is seen tickling from the left eye.

This is a mask for all occasions. The primary aim of the mask is to give you anonymity. Since it is a full face mask, your identity remains secret. 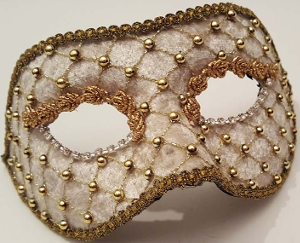 Colombina is a maid servant in the Commedia dell’arte. She is Arlecchino’s love interest. She represents an intelligent character Commedia dell'arte who helps her mistress in many ways.

This is the most elaborately decorated Commedia dell’Arte mask. It is a beautiful half face mask which is heavily decorated around the eyes.

This mask can be worn to any masquerade party or carnival. If you have beautiful eyes, this mask accentuates their beauty.